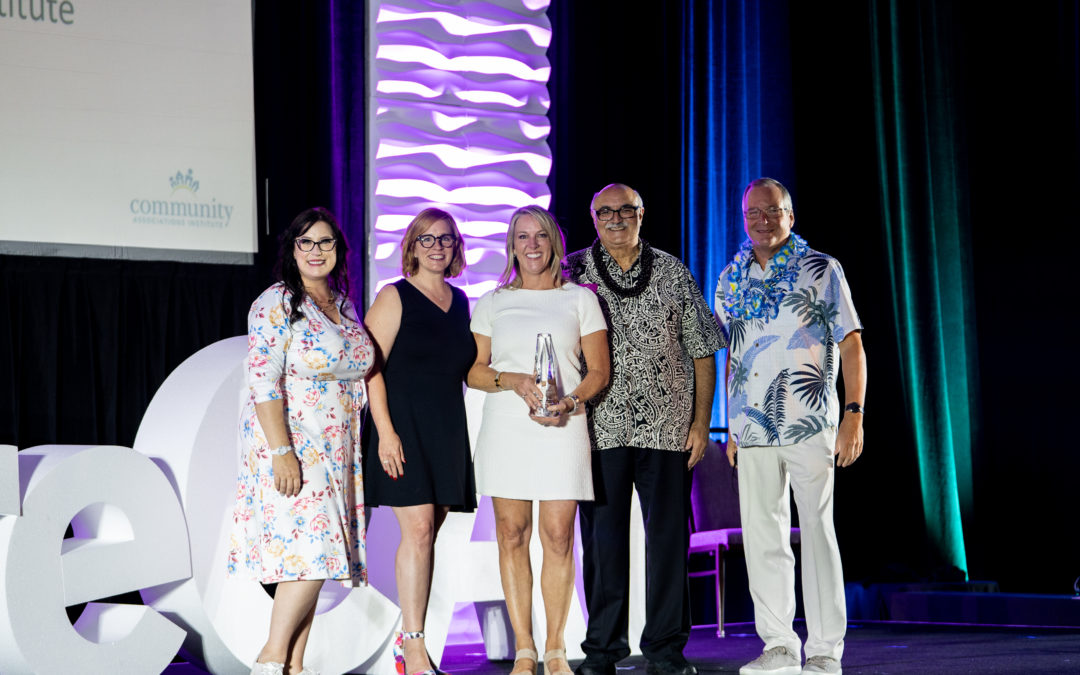 Each year, CAI highlights the efforts of individuals who go above and beyond to demonstrate exemplary service, leadership, excellence, and dedication to support and advance community association governance, management, and living as well as CAI programs and initiatives.

The recipients of CAI’s highest honors were announced at its annual awards ceremony held on Aug. 20 in Las Vegas in conjunction with the 2021 CAI Annual Conference and Exposition: Community NOW.

Marilyn Brainard was presented the Distinguished Service Award, CAI’s most prestigious recognition given periodically to an individual for long-standing, extraordinary contributions and exemplary service. She has served on the CAI Board of Trustees, Homeowner Leaders Council, and Nominating Committee, and continues to be a strong volunteer and homeowner advocate as part of the Nevada Legislative Action Committee, the Federal Legislative Action Committee, and the Government and Public Affairs Committee, including chair of the Public Policy Task Force.

Michael D. Johnson, CMCA, AMS, PCAM, received the Outstanding Volunteer Service Award, which recognizes a member who demonstrates exceptional leadership and long-term dedication to CAI and community associations. In 2020, Johnson drafted a COVID-19 reopening guide for his clients and generously shared it with CAI to use in any way that was useful. He has taught dozens of classes as a faculty member, is a founding member of the CAI Utah Chapter, and serves on the Utah Legislative Action Committee.

Katie Anderson, CMCA, AMS, PCAM, was named the CAI Rising Star, an honor given to an individual whose leadership abilities and professional contributions signify even greater accomplishments in the future. She is a founding member of the Central Oregon Regional Chapter and a member of the Oregon Legislative Action Committee. Anderson encourages community association managers to be involved locally in the chapter and, most importantly, has pushed the Oregon LAC to comply with best practices, communicate with membership, and be a more inclusive and effective entity.

Robert M. Diamond, Esq., and Laurie S. Poole, Esq., both fellows in CAI’s College of Community Association Lawyers, were honored with the Author of the Year award, a recognition that honors a volunteer who consistently provides extensive and timely editorial support and content expertise by writing, editing, and reviewing CAI publications and newsletters, authoring a new, significant publication, or otherwise authoring materials of significance to CAI’s mission. Diamond and Poole led a working group of community association lawyers to create Guiding Principles for Community Association Governing Documents, a comprehensive document to assist attorneys in the process of drafting or amending governing provisions.

Given solely at the discretion of the immediate past president, this award recognizes an individual who has displayed exemplary service and commitment to CAI and who has been instrumental in helping the president achieve CAI’s goals. The announcement of the 2020 recipient was delayed due to the COVID-19 pandemic; CAI did not hold its Annual Conference last year.

“My tenure as president during the COVID-19 pandemic saw many changes. Dawn was always there to offer me support both professionally and personally. Whether she was delivering food to my front door or busy creating useful content to support our members during the pandemic, her kindness and tireless efforts to support CAI make her a great recipient to receive this year’s award,” says Burgess.

>>For a complete list of award recipients, including chapter awards, visit www.caionline.org/CAIAnnualAwards​.