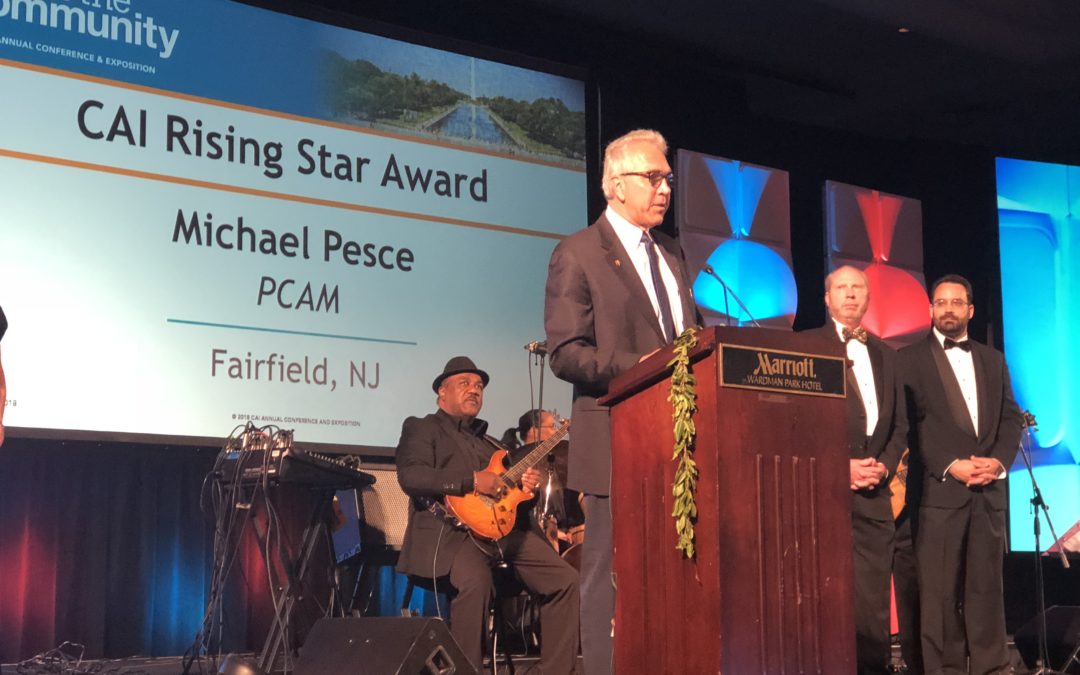 CAI honored several members at the Annual Awards Dinner, on May 11 in Washington, D.C., in conjunction with our 2018 Annual Conference and Exposition. The honors presented throughout the evening saluted individuals who have demonstrated exceptional leadership to advance community association living.

A past president of CAI’s New Jersey Chapter and an active member of the chapter’s legislative action committee, Michael Pesce (pictured above), PCAM, received CAI’s Rising Star Award. When he agreed to teach The Essentials of Community Association Management (M-100) as a full-semester, accredited course at New Jersey’s Montclair University after more than three decades of volunteer service, Pesce helped CAI reach an important milestone.

Robert M. Diamond, Esq., was awarded the Distinguished Service Award, CAI’s most prestigious recognition, and is the first person to receive this honor twice. A past president of CAI and of CAI’s Washington Metropolitan Chapter, Diamond is a member of the Board of Governors of the College of Community Association Lawyers (CCAL) and has served in numerous other CAI volunteer roles. One of his key contributions has been as CAI’s liaison to the Uniform Law Commission’s Joint Editorial Board for Uniform Property Acts.

Gregory Smith, CMCA, AMS, PCAM, CAI’s 2017 president, honored Mike Packard, PCAM, with this year’s President’s Award. Given solely at the discretion of the immediate past president, this award recognizes an individual who has displayed exemplary service and commitment to CAI and who has been instrumental in helping the president achieve CAI’s goals. In presenting this honor, Smith said Packard “has been a model of education, relationship building, and leadership to CAI members for decades, and has been instrumental in helping me reach where I am today.”

Matt D. Ober, Esq., received CAI’s Outstanding Volunteer Service Award, which recognizes a member who demonstrates outstanding leadership and long-term dedication to CAI. President-elect of the College of Community Association Lawyers (CCAL), Ober is a past president of CAI’s Greater Los Angeles Chapter, a two-time past president of the Greater Inland Empire Chapter, and a member of CAI’s California Legislative Action Committee and CAI’s Government & Public Affairs Committee, among many other endeavors.

Cylinda Walker, CMCA, AMS, PCAM, was named Recruiter of the Year. She introduced CAI to 134 new members in 2017. Play the video below to hear what she said upon accepting the honor.