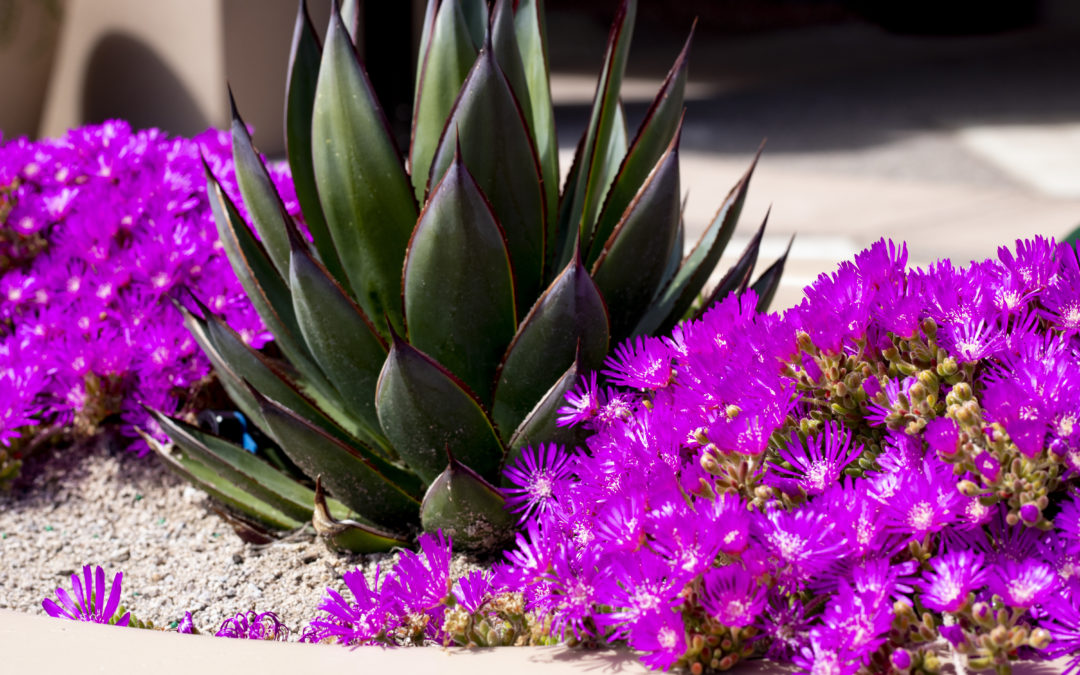 Sun City Anthem Community Association in Henderson, Nev., has replaced about 33,000 square feet of common area sod with flowering plants, shrubs and other drought-tolerant landscaping such as cacti, ocotillo, and lantana since 2018. (Photo courtesy of Sun City Anthem.)

Drought brought on by climate change has many community associations out West making a commitment to pulling up grass and installing more sustainable landscaping. Others are turning to smart irrigation systems to reduce water consumption and even relaxing enforcement of landscaping maintenance.

These communities are writing a new chapter in America’s fascinating history with lawns. According to research published by NASA in 2005, grass is the most grown crop in the U.S. Lawns covered an estimated 63,000 square miles at the time—roughly the size of Texas. That’s a lot of land dedicated to something that is primarily a design aesthetic.

Interestingly, the grasses that are commonly used for lawns aren’t native to this side of the Atlantic. Guinea grass and Bermuda grass from Africa are common throughout the south. Kentucky bluegrass, now the most favored lawn grass, came from Europe and the Middle East. In the West, Spanish soldiers and missionaries brought seeds from the Mediterranean.

Our obsession with lawns might have started with George Washington and Thomas Jefferson. The founding fathers were emulating the styles of French and English country estates at their own retreats, Mount Vernon and Monticello, respectively.

Today, one thing is certain: A nice lawn requires time, money, and plenty of water—not to mention pesticides, herbicides, and chemical fertilizers.

Historic changes born out of a historic drought are underway.

Sun City Anthem Community Association in Henderson, Nev., launched its xeriscape or desert-scape water-smart program in 2018 when Facilities Maintenance Manager Larry Fossan was hired at the 55-and-over community. Since then, the 140-acre property of 7,144 single-family homes and villa duplexes has replaced about 33,000 square feet of common area sod with flowering plants, shrubs, and other drought-tolerant landscaping such as cacti, ocotillo, and lantana. Fossan estimates the sustainable landscaping move has saved 30 million gallons of water. Sun City Anthem expects to remove about 5 acres of turf by the end of 2026.

The community also cut down ash trees and large pines, replacing them with less thirsty and easier to maintain varieties such as desert willows, mountain laurels, and crepe myrtles.

Fossan educated residents on what the community was doing and why they were doing it on a two-hour landscape tour. He showed them all the colors, textures, and benefits of drought-tolerant plants. Year-round color is even drawing more hummingbirds and butterflies for residents to enjoy.

“They’re actually loving it and are out there with their cameras taking photos of butterflies,” Fossan says. Saving water means lower bills and less maintenance for owners. This year alone, Fossan says the community’s water bills were reduced by about $70,000; that’s good news for budgeting.

Sun City Anthem also is swapping out sprinklers for smart controllers that factor in temperature, humidity, wind, and soil moisture to decide how much water plants need and when they need it.

>>Read more about sustainable landscaping and how communities are reorienting to a severe and widespread drought in “Coming Up Dry” from the January/February 2022 issue of CAI’s Common Ground magazine.