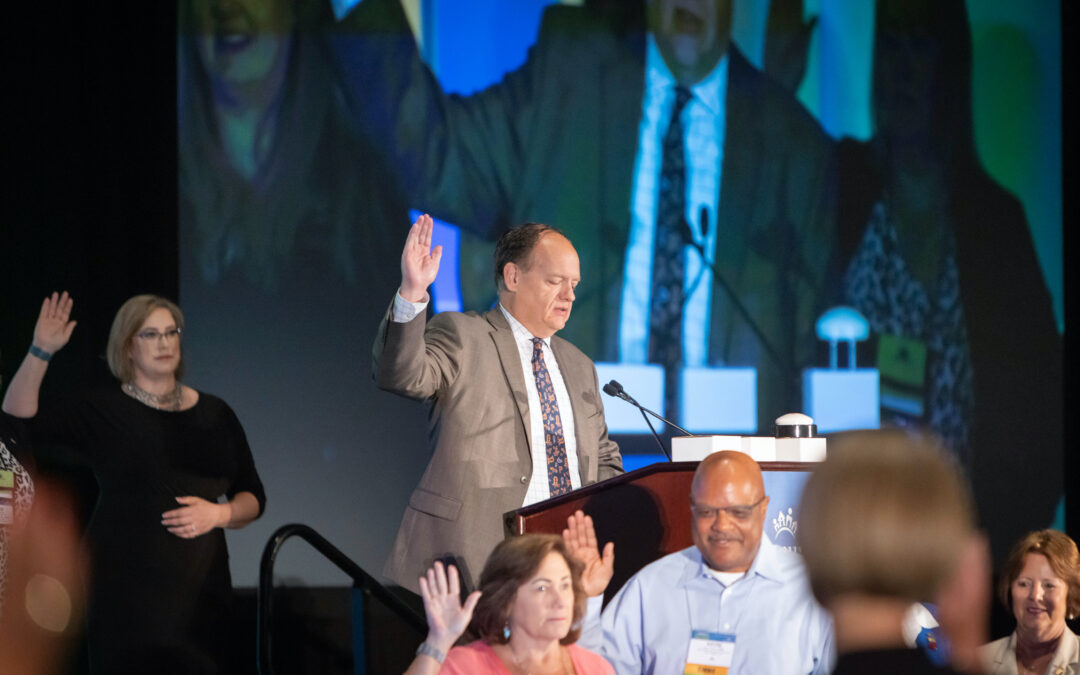 Photo caption: Michael Johnson, CMCA, AMS, PCAM, leads the Professional Community Association Managers pledge at the 2022 CAI Annual Conference and Exposition in Orlando in early May. Johnson was recognized as CAI’s Educator of the Year.

CAI members work tirelessly by volunteering their time and commitment to make communities preferred places to call home. Each year, we honor those dedicated individuals who have demonstrated exceptional leadership to advance community association living.

Whether you’re a new or long-standing CAI member, you’ve probably seen or heard one of these outstanding members deliver a webinar, teach an education course, speak at a chapter luncheon, or connect with them at a conference. Help us congratulate the following individuals who make a difference for our 43,000 members and the more than 74 million Americans who live and work in community associations.

Robert Felix, CMCA, PCAM, RS, was presented the Distinguished Service Award. Felix, now serving as president of Verity Property Management in Boise, Idaho, has been an industry leader and has served in numerous CAI roles for more than four decades. He was the first faculty member to teach CAI’s M-100: Essentials in Community Association Management course in Dubai and has been the primary trainer for new CAI faculty for over 20 years.

Michael Johnson, CMCA, AMS, PCAM, was recognized as Educator of the Year. Johnson, CEO of HOALiving in Draper, Utah, has been a CAI faculty member since 2005 and has taught dozens of courses in the U.S. and Middle East, instructing more than 1,000 students. In 2021, he was instrumental in helping CAI modify in-person education courses for a virtual platform.

Tonya Gale, CMCA, AMS, PCAM, was recognized for the second year in a row as Recruiter of the Year. Gale, owner of Epic Association Management in Las Vegas, has been a dedicated CAI advocate since 2011, serving as the CAI Nevada Chapter‘s membership committee chair, on its board of directors, and as its 2020 president. She recruited 59 new CAI members in 2020 and 31 in 2021.

Noelle Hicks, Esq., was named the CAI Rising Star. Hicks, an attorney with Roberts Markel Weinberg Butler Hailey law firm in San Antonio, made her debut as a national speaker at the 2021 Community Association Law Seminar with a powerful panel presentation on overcoming racism in community associations. The session manuscript earned the 2021 best manuscript award from CAI’s College of Community Association Lawyers; portions of the manuscript were turned into CAI’s Diverse & Inclusive Communities Guide, which helps board members and community association managers navigate these important topics.

Given solely at the discretion of CAI’s immediate past president, this award recognizes an individual who has displayed exemplary service and commitment to CAI and who has been instrumental in helping the president achieve CAI’s goals.

>>View a complete list of honorees and award recipients, including chapter awards.